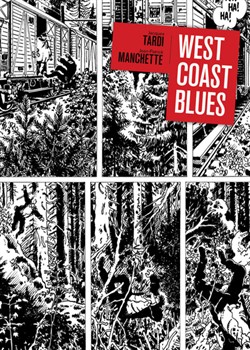 George Gerfaut, aimless young executive and desultory family man, witnesses a murder and finds himself sucked into a spiral of violence involving an exiled war criminal and two hired assassins. Adapting to the exigencies of his new life on the run with shocking ease, Gerfaut abandons his comfortable middle-class life for several months (including a sojourn in the countryside after an attempt to ride the rails turns spectacularly bad) until, joined with a new ally, he finally returns to settle all accounts... with brutal, bloody interest.

Originally released in 2005, West Coast Blues (Le Petit bleu de la cote ouest) is Tardi's adaptation (which was an Eisner Award nominee in several categories) of the popular 1976 novel by the French crime writer Jean-Patrick Manchette. Tardi's late-period, looser style infuses Manchette's dark story with a seething, malevolent energy; he doesn’'t shy away from the frequently grisly goings-on, while maintaining (particularly in the old-married-couple-style bickering of the two killers who are tracking Gerfaut) the mordant wit that characterizes his best work. This is the kind of graphic novel that Quentin Tarantino would love, and a double shot of Scotch for any fan of unrelenting, uncompromising crime fiction.