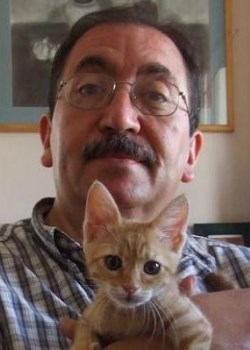 Font was born in Barcelona. He began his comics career in the 1960s as apprentice in the local Editorial Brugnera studio, working mostly at western, war, mystery and horror series, especially for foreign publishers. In the 1970s he worked for the British publisher Fleetway to several comics, in particular war series such as Black Max; later he would also work for American publishers Warren Publishing and Skywald. During the latter decade, he shortly moved to Paris, where he collaborated with the magazine Pif gadget for which, among the others, he created the science fiction series Les Robinsons de la terre. In 1972 he illustrated the series "Geminis", written by Carlos Echevarría, dealing with espionage adventures set in World War I.

Between the 1970s and the 1980s Font realized his most famous series: Historias negras ("Dark Stories"), a collection of eighteen short, dark humorous adventures, and the science fictional Cuentos de un futuro imperfecto ("Tales of an Imperfect Future"). This was followed in 1982 by the similar, though more hilarious El prisionero de las estrellas ("The Prisoner of the Stars"), an ecological-themed series, and Clarke y Kubrick, Espacialistas Ltd ("Clarke & Kubrick: Spatialists Inc."). Though the two main protagonists' names are those of the creators of 2001: A Space Odyssey, author Arthur C. Clarke and film director Stanley Kubrick, this series' is mostly inspired by Robert Sheckley's short stories. In 1982 he also released an erotic-comic series entitled Carmen Bond.

In 1985 Font created Jon Rohner (initially as Jann Polynesia), a comics about a seaman's wanderings inspired by tales of authors such as Jack London and Robert Louis Stevenson.The series won Haxtur Award in 1990 as "Best Short Comics" in the Salón Internacional del Cómic del Principado de Asturias at Gijón.

In 1987 he worked at Taxi, about a young female taxi-driver who lives a series of spy adventures. The Italian magazine L'Eternauta, in 1988, published his series Alice e gli Argonauti ("Alice and the Argonauts"), a science fictional adventure of a young girl searching for her father, imprisoned by a dictatorial government. Also in Italy, he published a series of self-contained stories entitled "Private Eye", about a private detective, and Bri D'Alban, about the clash between the Catholic church and the Cathar heretics during the early 13th century. In 1996 Font received the Yellow Kid Award at the Lucca Comics event.

In 1998 Font drew for Sergio Bonelli Editore a special comic book for Tex Willer (#12, 1998). Four years later he became a regular member of the staff working at Tex ongoing series; in 2012 he also worked at a short story of Dylan Dog.

In 1999, with writer Ewald Fehlau, he adapted Jason Dark's ghost hunter for German Publisher Bastei Verlag. In 2004 he was one of the artists called for the revamping of Pif Gadget, appearing with the pirate comic Les Aventures de Trelawney, written by Richard Marazano. In 2010 he provided art for the medieval historic series Heloise de Montfort, also with script by Marazano.