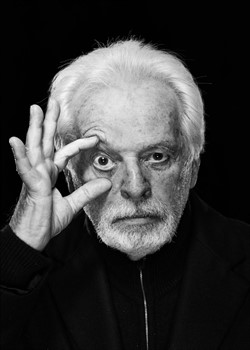 Alejandro Jodorowsky Prullansky (born 17 February 1929) is a Chilean-French filmmaker. Since 1948, Jorodowsky has worked as a novelist, a storyteller, a poet, a playwright, an essayist, a film director and producer, an actor in cinematic and theatre productions, a theatre director, a screenwriter, a film editor, a comics writer, a musician and composer, a philosopher, a puppeteer, a mime, a psychologist and psychoanalyst, a draughtsman, a painter, a sculptor and a spiritual guru. Best known for his avant-garde films, he has been "venerated by cult cinema enthusiasts" for his work which "is filled with violently surreal images and a hybrid blend of mysticism and religious provocation".

Born to Jewish-Ukrainian parents in Chile, Jodorowsky experienced an unhappy and alienated childhood, and so immersed himself in reading and writing poetry. Dropping out of college, he became involved in theater and in particular mime, working as a clown before founding his own theater troupe, the Teatro Mimico, in 1947. Moving to Paris in the early 1950s, Jodorowsky studied mime under Étienne Decroux before turning to cinema, directing the short film Les têtes interverties in 1957. From 1960 he divided his time between Paris and Mexico City, in the former becoming a founding member of the anarchistic avant-garde Panic Movement of performance artists. In 1966 he created his first comic strip, Anibal 5, while in 1967 he directed his first feature film, the surrealist Fando y Lis, which caused a huge scandal in Mexico, eventually being banned.

His next film, the acid western El Topo (1970), became a hit on the midnight movie circuit in the United States, considered as the first-ever midnight cult film, garnering high praise from John Lennon, which led to Jodorowsky being provided with $1 million to finance his next film. The result was The Holy Mountain (1973), a surrealist exploration of western esotericism. Disagreements with the film's distributor Allen Klein, however, led to both The Holy Mountain and El Topo failing to gain widespread distribution, although both became classics on the underground film circuit.

After an aborted attempt at filming Frank Herbert's 1965 science fiction novel Dune, Jodorowsky produced five more films: the family film Tusk (1980); the surrealist horror Santa Sangre (1989); the failed blockbuster The Rainbow Thief (1990); The Dance of Reality (2013) and Endless Poetry (2016). Meanwhile, he has simultaneously written a series of science fiction comic books, most notably The Incal (1980–1989), which has been described as having a claim to be "the best comic book" ever written, and also The Technopriests and Metabarons. Accompanying this, he has also written books and regularly lectures on his own spiritual system, which he calls "psychomagic" and "psychoshamanism" and which borrows from his interests in alchemy, the tarot, Zen Buddhism and shamanism.

His son Cristóbal has followed his teachings on psychoshamanism; this work is captured in the feature documentary Quantum Men, directed by Carlos Serrano Azcona.

Madwoman of the Sacred Heart